For a long time we did not hear anything new from French drone manufacturer Parrot: since the launch of the Bebop 2 two years ago, Parrot has not release any model against the market leader DJI in the field of “prosumer” camera drones. Apparently the French have made good use of the time and are now returning with a folding 4K camera drone. The new Anafi model is a direct attack on the DJI DJI Mavic Air

What we like: 21 MP camera and 4K HDR videos

And what do we ant to see in a current, compact drone in order to compete with DJI? A really good camera and state-of-the-art flight control! The Parrot Anafi comes with a 4K camera with a 21 MP Sony sensor (1/2.4” CMOS), which, unlike the Mavic camera, can also be rotated vertically by 180 degrees. According to Parrot, the Anafi is the first drone that can record 4K HDR videos. DJI’s Mavic Air can take 4K photos in HDR, but no videos. The Air can record video at 120 fps at 1080p, while Parrot HD can only record at 60 fps. Parrot also provides a 2x digital zoom that supposedly works without loss of quality, as the camera does not use the full resolution of the image sensor for video.

The Anafi is charged via USB-C and has a maximum flight time of 25 minutes with one battery. The maximum speed in sports mode is 55 km/h and it offers range up to 4 km (when using the remote control). These are about the same values as the Mavic Air. The small drone is supposed to withstand wind speeds of up to 35 mph – I am curious to test this in real life, after all the Anafi weighs only 320 g.

Unlike the DJI models, the Parrot Anafi does not have any sense & avoid system. There is only one ultrasonic sensor on the underside to measure the distance to the ground. Parrot pilots must therefore take care to not to fly into obstacles by themselves. To put this in relation: even the $100-model Tello from Ryze/DJI has integrated an Avoidance system!

You need to download Parrot’s new FreeFlight 6 Pilot app to fly the Anafi. The app offers automated flight scenes for dronies (selfie with the drone), slow motion, time-lapse and landscape shots. There is also a paid Follow-Me function to track people and cars and some kind of mission planning to set and fly waypoints. Not bad, but even there DJI offers more with the Mavic Air, for example with its innovative flight scenes like Asteroid and Boomerang.

Anafi’s launch date is July 1, 2018, and it can be pre-ordered for $700. The package includes the drone, a remote control, a transport case, lighting, micro USB and type C cables, the usual spare rotors and even a MicroSDXC memory card with 16 GB.

If you know for sure that you do not need obstacle detection for your drone but want to have a decent camera for a good price, the Anafi might be your drone. At least if you can handle its insect-style design.

However we recommend to wait for the start of sales of Anafi. Depending on where the street price levels off, the drone can be an alternative to the DJI models. But be aware, the DJI DJI Mavic Air

is only $100-$200 more expensive but also offers a little more recent technology. 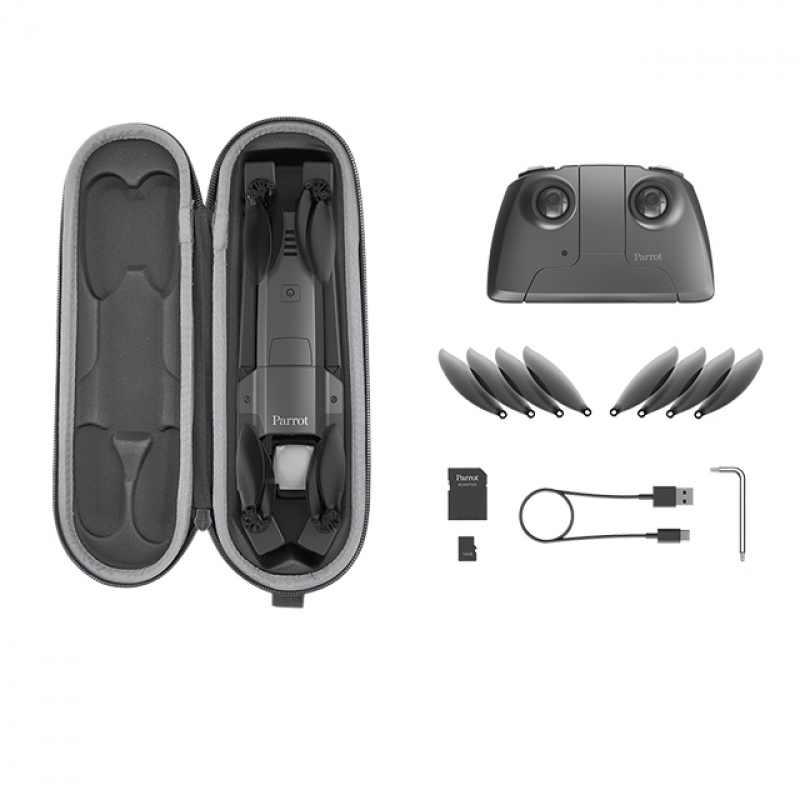 The Parrot Anafi can be folded away and stored in its case. Photo credit: Parrot