As expected, DJI has launched the two new Multicopter models Mavic 2 Pro and Mavic 2 Zoom. The Mavic 2 Pro is the successor to the DJI Mavic Pro launched in 2016 and offers the largest image sensor in a foldable, compact drone currently on the market. The Mavic 2 Zoom is DJI’s first camera drone with a zoom lens. Both cameras were developed together with the famous camera manufacturer Hasselblad.

The Mavic 2 Pro has a 1-inch CMOS sensor with a resolution of 20 megapixels (5472 × 3648 pixels) integrated. In video mode, the camera supports a 4K resolution of 3840 × 2160 at a maximum of 30 frames per second (up to 120 frames in Full HD). The focal length is 28 mm with an aperture from f/2.8 to f/11, and the Hasselblad Natural Color Solution algorithm is now used, which promises particularly high color fidelity. 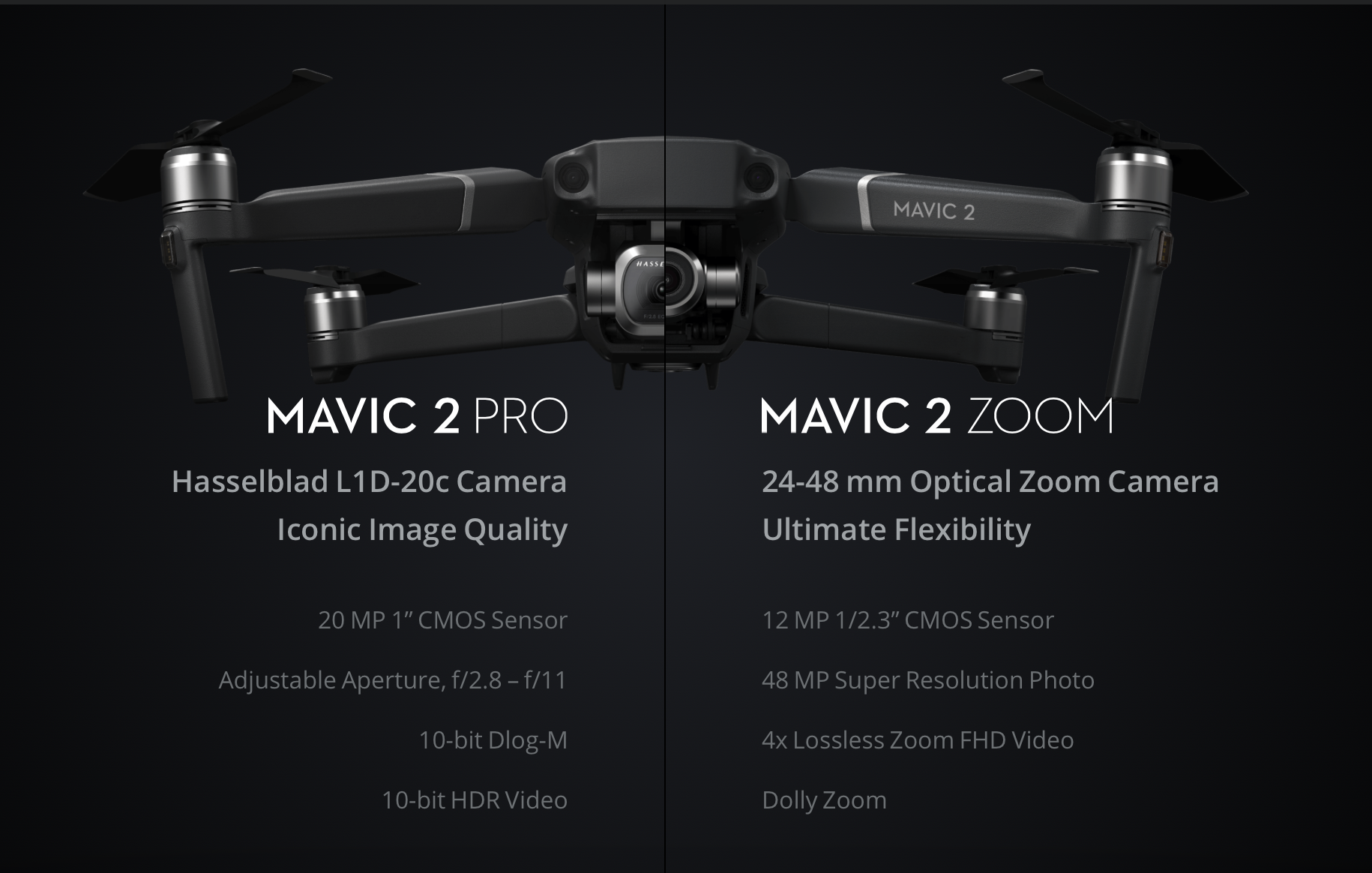 Mavic 2 Pro and the Mavic 2 Zoom

Main difference of the two drones is in the camera, but bodies and flight characteristics are almost identical: Both can be folded together to a size of 8.4 x 3.6 x 3.3 inch and a weight of 2 lbs, making them backpack-friendly but slightly bigger than the predecessor Mavic Pro. Both can reach a top speed of 44 mph (72 km/h). Further upgrades compared to the previous model are the 31 minutes flight time and the use of 10 sensors to prevent the drone from colliding with obstacles during flight. DJI’s lightbridge connection was replaced by OcuSync 2.0, for 1080p live streaming to your smartphone at distances of up to 5 miles.

Different flight modes are offered, such as several hyperlapse modes, which enable time-lapse video recording. Autotrack 2.0 and a 3D map of the environment created by sensors is also intended to predict the movements of objects in order to keep them in focus and film them better. The dolly zoom mode of the Mavic 2 Zoom is particularly interesting here: The drone flies away from an object and zooms in simultaneously. By zooming in at the same time, the size of the subject appears unchanged, but the environment disappears from the image.

With its Hasselblad camera and 1-inch image sensor, the Mavic 2 Pro is focusing on professional filmers and photographers. The Mavic 2 Zoom offers a lot of flexibility and new video effects with the zoom function.

The Mavic 2 Zoom starts at $1,249, and the Mavic 2 Pro is a bit more expensive at $1,449. You cannot decide which Mavic 2 model is your favorite? Be aware that DJI plans to offer a service to swap out the cameras and gimbals, so it will be possible to upgrade your Mavic 2 Zoom to a Mavic 2 Pro.