For several months rumors have been spread about a successor of the popular DJI Mavic Pro drone. As usual, in drone enthusiats speculate about possible features and at some point blurry photos of alleged prototypes from Chinese social media sources appear. The truthfulness of such information is often not very high.

But when it comes to execute the usual steps before a product launch, we have seen quite some fails in the past, which have provided us with leaked information. A very good source for this haven been electronics shops where you can buy drones. These are usually provided with marketing material and product information before the product launch, so that they can go online on time on the day of publication.
Errors occur on a regular basis and the highly secret product information can be found online way too early. This time it happened to dealer Argos in Great Britain, who lost marketing material for the new DJI Mavic 2 product line. Even if the errors are usually noticed quickly, friendly Twitter users like Monty_f save us the original screenshots. 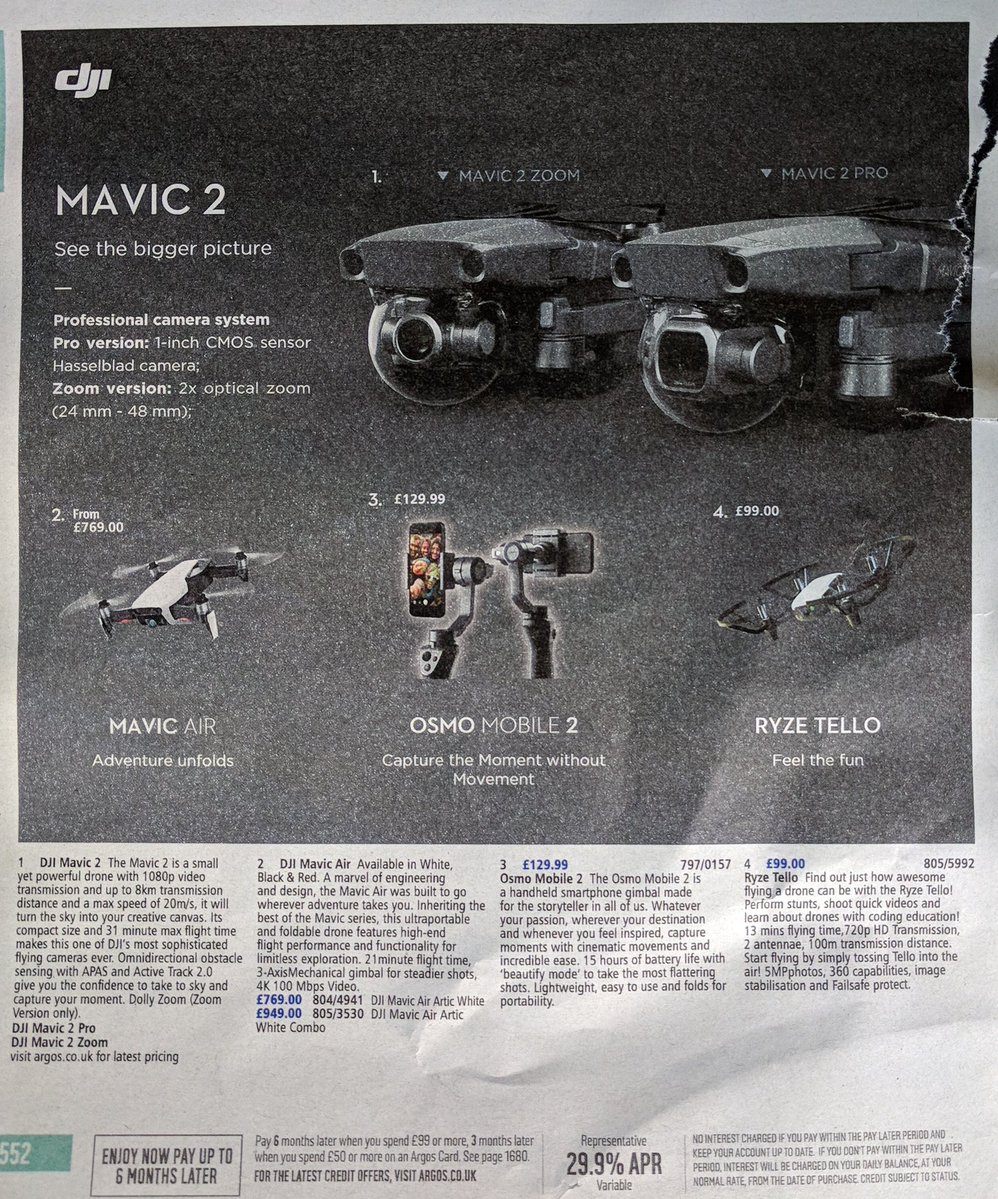 This ad reveals some interesting news: Apparently DJI will launch two versions of the Mavic 2. The “Mavic 2 Zoom” version is to include a 2x optical zoom lens for close-ups from the air, while the “Mavic 2 Pro” model includes a Hasselblad camera with a 1-inch sensor without zoom. Potential buyers must therefore decide whether they prefer the maximum quality of a fixed focal length or the flexibility of a zoom lens.

The ad also advertises 360-degree obstacle sensing, a top speed of 45 km/h and a flight time of 31 minutes. For video quality there is only the information that a live feed in 1080p resolution can be transmitted up to a distance of 8 km (around 5 miles). It can also be assumed that the video resolution will be at least 4K, as this was already achieved by the predecessor model. Prices are not listed. The Mavic 2 Zoom Model will probably be in a similar price range to the previous Mavic model and start at around 1,000 dollars, but that remains speculation.

A lot of interesting information, which is of course anything but confirmed. But what also speaks for an approaching product launch: DJI has postponed a planned launch event, which should have taken place on July 18, 2018, shortly before for an indefinite period of time. This can be a common marketing trick to get more attention, or delays in the product launch – in any case DJI probably plans a bigger announcement in the near future and the probability that this is about the Mavic 2 is high.

UPDATE 18.08.18: DJI has just scheduled a new press date for August 23rd. The event is called “See the Bigger Picture”. It can be assumed that DJI will present the new product line Mavic 2 here.