. Longer delivery times for new models are nothing new with DJI: also for the DJI Mavic Pro you had to wait several weeks after placing your order. But now the drone has finally arrived and wow –  it makes a very good impression on unpacking: The new design is really compact, built quality is very good and the drone is very light with just about 15 ounces (430 grams).

Like its bigger brother, the Mavic Air has a well-thought-out folding mechanism for the outriggers, so that it can be folded into a compact cuboid without protruding elements. When folded in, the size of the drone is only 6.6 x 3.3 x 1.9 in (168×83×49 mm) – hardly more than a large smartphone (except the height obviously). The Mavic Air fits easily into a bag or small backpack. The Mavic Air has also received a nice update to the collision avoidance system: The drone scans the environment not only forward but also backward with a dual camera system to prevent collisions. This is really useful because you often fly backward with a camera drone when filming.

, the new Mavic Air can be controlled with gestures. In addition, the familiar QuickShot modes have been extended by two further flight maneuvers. In addition to Rocket, Dronie, Circle and Heli modes, there are now Asteroid and Boomerang modes. The new “Sphere Panorama” function, which automatically takes 25 photos and combines them into a 32 MP panorama, is also particularly popular.

The first setup is quickly done as usual with DJI drones, the Mavic Air is easy to unfold and the new mechanism for removing the gimbal protection is well done. The small drone has 7 sensors (front, rear, down) to prevent collisions with obstacles. These also immediately sprung into action on the first short indoor test, numerous warnings appeared on the display. A note in advance: There are no sensors on the side, and in the Quick Shot flight mode drone is quite often flying sidewards, so the pilot has to watch out for obstacles himself! In addition, this anti-collision system does not work in sports mode. The normal flight mode also allows flight speeds of up to 50 km/h.

Outside, the Mavic Air seems to feel more comfortable, the controls are light and the drone can be precisely steered with the controller. The flight stability is quite good despite the low weight. According to DJI, the drone can handle wind speeds of up to 38 km/h. In this case, however, the maximum flight time of 21 minutes is definitely not reached – this only applies in conditions without any wind. Since it wasn’t very windy during my flight tests, I link you here a video how Mavic Air really handles gusty winds:

The camera has a 1/2.3″ CMOS image sensor that can take 12 MP photos (including a new HDR mode) or 32 MP spherical panorama shots. The lens has an aperture range of f/2.8 and a focal length of 24mm. In addition, 4K videos can be filmed at 30fps, 2.7K video at 60fps and Full HD video at 120fps. Recording can be done at a fast bit rate of 100 Mbps, which allows much more information to be packed into the video. The camera system offers an 85-degree field of view and is supported by a 3-axis gimbal for stable images. The data is stored on either the internal 8 GB memory or on a MicroSD card (not included).

I am very satisfied with the image quality of the camera. I flew in different light situations (sunny, cloudy, indoor) and filmed mainly in 4K. The shots are sharp in my opinion, the dynamic range is good and the colors are rather on the bright, saturated side, which should please many amateur filmmakers. This might also be the ideal target group for the Mavic Air, the professionals might miss the manual adjustment options for both photo and video: there is an automatic and a manual mode, but the exposure cannot be adjusted. Correspondingly, the practical little wheel for the exposure setting on the controller of the expensive Mavic Pro is missing. 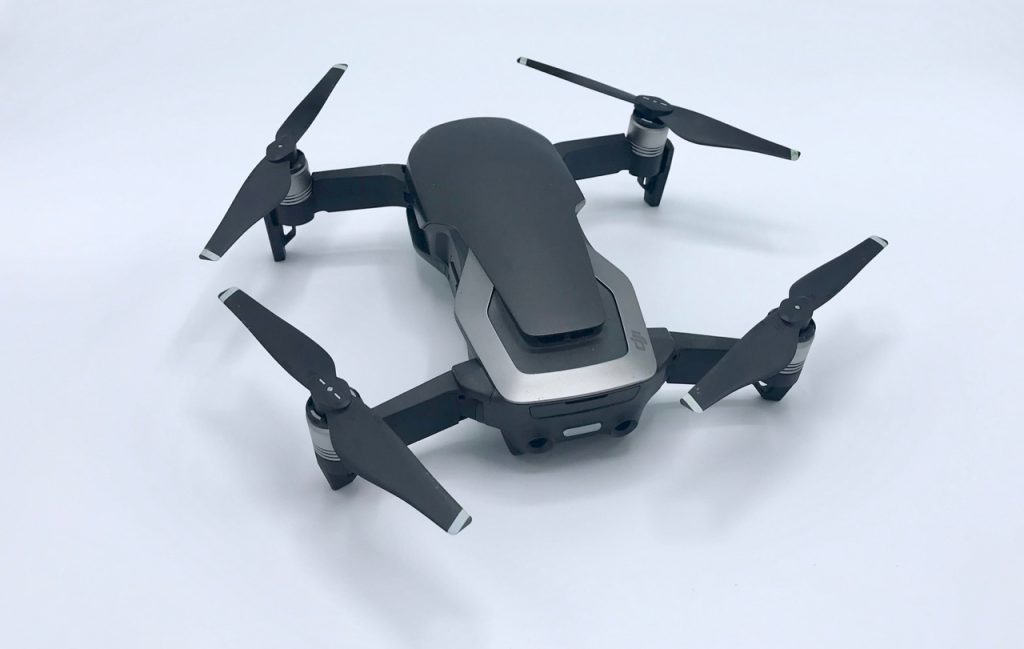 is available in white, black and red. The current online price is $799. The delivery includes a battery, a remote control, a carrying case, 2×2 propeller protectors and 4 pairs of propellers.

There is also a Fly More Combo

package for the Mavic Air for $ 999: two spare batteries, a bag instead of a carrying case, six instead of four pairs of propellers, a battery-to-power bench adapter and a battery charging station.

is smaller and lighter than the DJI Mavic Pro

and simply fits into a pocket of one backpack. This makes the drone the ideal companion when traveling or on hiking tours, where every grief counts. It is very easy to fly and is also suitable for beginners due to the modern anti-collision system. The battery is rather tight, in reality, the flight time will be 10-15 minutes, a second battery is therefore mandatory. Nonetheless, the Mavic Air

is probably the new No. 1 in the class of compact camera drones.

Summary of the specs: